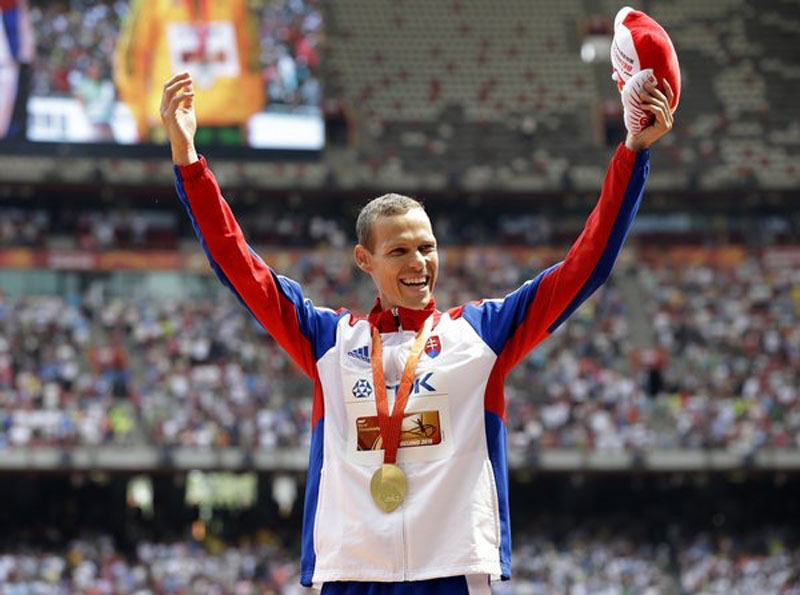 Our university graduate, Matej Toth, celebrates winning the men's 50 km race walk final during the 15th IAAF World Championships at the National Stadium in Beijing, China August 29, 2015. Matej Toth became the first Slovak to win a gold medal at the world athletics championships when he cruised to victory in the men's 50 km race walk on Saturday. The 32-year-old Matej Toth surged ahead after opening up an early lead in the grueling event to win in a time of three hours, 40 minutes and 32 seconds on a hot and humid morning in the Chinese capital. Toth finished almost two minutes clear of his nearest rival, crossing the finish line at Beijing's national stadium with the Slovak national flag raised over his shoulders.
"Of course, conditions were tough but my feeling was great," Toth said in a televised interview.
"My heart-rate, my stomach, my dreams, my refreshment, everything, was under control.
"It was my race, it was my pace, and it’s much easier to do your own race. I felt very good, without any problems, and this is the most important thing, why I won."
Australia's Jared Tallent, the silver medalist at the last two Olympics and bronze medalist at the previous two world championships, finished second, continuing his impressive streak of podium finishes at major events.
"Of course, everyone expected that I am the favorite and I should win but I know that 50 km is very specific and there are very strong rivals.
"(It was only) after 30 km I started to think about winning, about the medal."
Source: Reuters online US edition Sports | Sat Aug 29, 2015 2:39am EDT
(Text by Julian Linden in Singapore; Editing by John O'Brien)
http://www.reuters.com/article/2015/08/29/us-athletics-world walkidUSKCN0QY02J20150829