You are here: UKF.sk » University » University Bodies » Management Board » Vice-Rector for Scientific Research

Prof. RNDr. Mária Bauerová, PhD. graduated from the Faculty of Natural Sciences, Comenius University in Bratislava in the field of Biochemistry in 1985. In 1995, she completed her PhD study in the field of General Zootechnics at the Research Institute of Animal Production in Nitra and Slovak University of Agriculture in Nitra. She has defended her habilitation work in the field of Special Biology and Ecology at UKF in Nitra in 1998 and earned her Professor title in the field of Biology in 2005. After graduation, she worked as a researcher in the Institute of Genetics and Experimental Biology at VÚŽV Nitra. Since 1995, she has been teaching at the Department of Botany and Genetics at the Faculty of Natural Sciences, UKF Nitra, initially as an external lecturer and since 1996 on a full-time basis.
She contributed to the development of modern molecular biology methods at the FPV departments of biology, construction of a number of experimental laboratories and establishment of the Agrobiotech Research Center at UKF. She is a guarantor of the Master’s program in Biology, co-guarantor of the Doctoral program in Molecular Biology and co-guarantor of the habilitation and professorship proceedings in the field of Biology. She is member of the Commission For Doctoral Studies in the field of Molecular Biology at FPV UKF in Nitra and FBP SPU Nitra. She is also member of a number of expert groups and scientific councils.
She worked as Vice-Dean at the Faculty of Natural Sciences and UKF Vice-Rector for Science and Research, and she also worked as a statutory representative of the Dean and Rector. On the national level, she was nominated Vice-Chairman of the Council of Higher Education for Science and Technology and member of the workgroup of the Accreditation Commission of the Slovak Government for “Life Sciences”.
She has worked as Vice-Rector at Constantine the Philosopher University in Nitra since July 10, 2018.
Contact Details
Department for Scientific Research
Tr. A. Hlinku 1
949 01 Nitra
Mgr. Martina Chmelová
Ing. Gabriela Sarovová 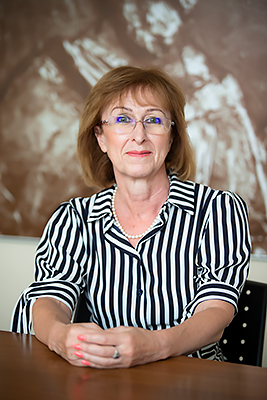