You are here: UKF.sk » University » University Bodies » Management Board » Vice-Rector for External Relations and Social Affairs

Doc. PaedDr. Miroslav Tvrdoň, PhD. graduated from Pedagogical Faculty in Nitra in 1988. In 1989, he was enrolled in the extended study program of Philosophy at the Comenius University in Bratislava, which he completed in 1994. He was the co-founder of the Department of Ethics, Catholic Ethics and Social Sciences at the then University of Pedagogy where he worked as a Secretary and later Deputy Head of Department. In 1996 he founded the Department of Social Work and Social Sciences with the aim to train educated social workers. This year he started giving lectures at the Seminary in Nitra as a teaching assistant, and continued to do so for the next ten years.
In 2003, he defended his dissertation thesis and was awarded the PhD degree at the Faculty of Political Sciences and International Relations, Matej Bel University in Banská Bystrica. In 2006 he defended his habilitation work and earned the Associate Professor title. In the years 2006 – 2014 he was nominated Vice-Rector for Public Relations and Social Affairs at Constantine the Philosopher University. He also acted as President of Academic Senate in the years 2014 – 2018.
Since 2014 he became member of the Municipal Parliament in the Nitra Municipality and Vice-President of the Commission for Education, Youth and Sports. Since 2015 he has become member of the Municipal School Council in Nitra and since 2017 he took membership in the Accreditation Committee of the Ministry of Labor, Social Affairs and Family of the Slovak Republic. In 2018 he was nominated to the Supervisory Board of ARRIVA Nitra, a. s.
He has held the function of Vice-Rector for External Relations and Social Affairs since July 10, 2018.
Contact
Department of External Relations and Social Affairs 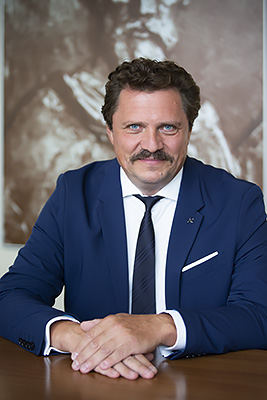